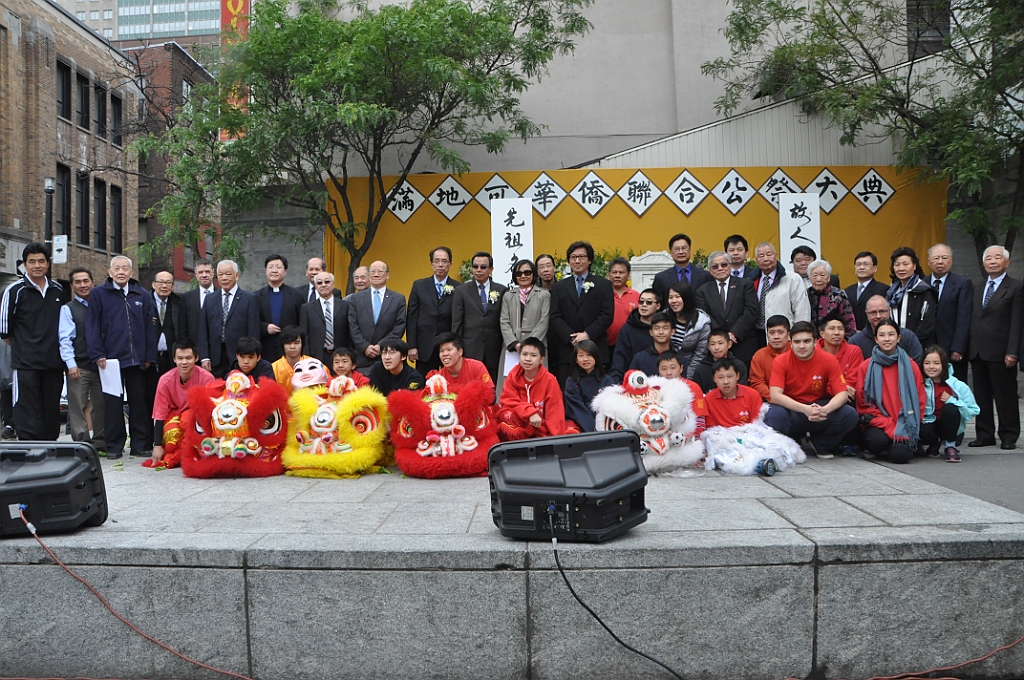 This annual event is to commemorate the Chinese ancestors who came to Canada to build the Canadian Pacific Railway. It was these pioneers who created what we now know as Chinatown.

As the president of the Chan Association, Jimmy Chan had the honor of being the Ceremonial Host of this year’s event.

This was a very proud moment for Jimmy, as he states:

Today is an important day to commemorate our Ancestors from our Chinese community in Chinatown (June 12th, 2016).

I had the honour of hosting this year’s paying respect to our Ancestors on behalf of our Chan Wing Chun Tong Association and on behalf of all the other Chinese Associations and our Chinese community.

When I was a kid growing up, I learned about our early Chinese people from more than 100 years ago, who left their homes and families in China to go to Canada to seek a better life. They have contributed so much by building the Canadian railroads and opened up mining. With their courage, effort, and belief that there will be a better day, their struggles and hardships of their everyday lives, they never had a chance to return home to their families and died alone . They never had a chance to learn what a better life was, which is what they came to Canada for. Because of them, they had paved the road for us. Because of their courage, spirit, and mind, they have established and achieved for our Chinese people a strong recognition and has given us strong positions in society today. Because of them, we all inherited the treasures that they brought to us, to make us stronger and to be recognize that we are all great Chinese Canadians.

In Chinatown, this is where the Chinese people arrived a hundred years ago. These Chinese men built these buildings for other Chinese people to come and have a place to stay. And yet at that time, Chinatown was a cage. Only certain Chinese men were allowed to leave the cage and work up north. They didn’t know where they would end up. Some of them left for work and never returned. This is how it was more than a hundred years ago. The cage is gone now. More Chinese immigrants have moved in, and we call this place Chinatown. Wherever you go in this world, if you see a Chinatown, there is a story behind it. These hundreds of Chinese men who left their homes in China to seek a better life in Canada were abandoned, but we remember them and what they did for us. Because of them, we are here today, and because of them, there is a Chinatown and there is a Chinese community. The Chinese associations who represent different names and dynasties from thousands of years ago such as the Chan, Wong, Lee, Hum and Woo associations. These were Cantonese and Toishanese immigrants and were the first Chinese to land in Canada. I am proud to say that I was taught well by my family to remember the past and to contribute to today’s society as a Canadian citizen, as a Chinese Canadian, and as a good human.

Today is the 21st annual commemoration of our ancestors. I am the president of the Chan Association, and I was among the hundreds of honored guests and friends from all over Chinatown who came together today to pay respect to our ancestors. I was told I am the youngest president to ever be elected in our Chan Association. Today, I achieved my vision and my goal of being able to contribute and to pay back to our community by volunteering my time, full-hearted effort with my family to be part of this mission, and to make Chinatown a better place, and to continue on our traditions, heritage and to pass them on to the next generations to learn and to carry on the commemoration of our ancestors, who were the heroes who built Chinatown and our Chinese community, and who contributed their lives to the land of Canada. I salute them with my deepest thoughts and with all my heart, and respect.